The Latest on Using Poison for Controlling Wild Pigs 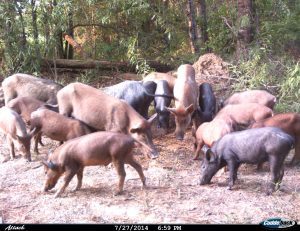 d the use of Kaput® Feral Hog Bait in January 2017 under the Federal Insecticide, Fungicide, Rodenticide Act. Kaput® produces a commercially-available bait containing warfarin. For those unfamiliar with warfarin, it is an anti-coagulant used for blood clot prevention in humans (Coumadin) in addition to being the primary ingredient found in rat and mouse bait.  Back in February, the Texas Agriculture Commissioner announced a state rule change that would allow the use of Kaput® for controlling feral hogs. However, this decision has been met with opposition and concerns over exposure for non-target species. Two bills from Texas lawmakers have halted the use of this product until current research used by the EPA in the approval process can be reviewed. Texas Parks and Wildlife is also delaying issuing a position statement regarding the use of this product until the research on impacts to non-target species can be assessed.

Concerns regarding the use of this toxicant other than non-target wildlife impacts include economic feasibility, its effectiveness, and humaneness. Prior to dispensing Kaput®, the recommendation is to pre-bait areas with a placebo for 3-6 weeks. Additionally, to attempt to reduce non-target impacts, pigs must be trained to use a restrictive delivery device (feeder). Feeders with a lid weight of 18lbs. are recommended. For hogs to ingest a lethal dose, they must feed on Kaput® for 4-7 days. When you factor in the pre-bait period and the time to reach a lethal dose, it may be up to seven weeks before the first hog dies. When trying to assess the potential effectiveness, we have to consider that hogs move in response to pressure and food resources. The 4-7 day mortality estimate assumes constant feeding so effectiveness could be further reduced if hogs are moving away from the “bait” over that seven week period. The humaneness of this toxicant has also been questioned. While most can agree feral hog populations need to be significantly reduced across the country, as wildlife managers we have a responsibility to achieve this in the most humane way possible. In addition to the 4-7 days for the animal to actually die from the toxicant, bleeding becomes more progressive over time. This product has already been deemed inhumane by the Australian government. Concerns have been raised that black bears are likely susceptible. Also birds, rodents, and small mammals could possibly pick up “crumbs” left by the hogs.

Another toxicant being evaluated by USDA is sodium nitrite. Sodium nitrite is currently being used in Australia as a hog poison but it is also used as food preservative in the United States (for all of all things, bacon). Death usually occurs within 1.5 hours as a result of depletion of oxygen to the brain and vital organs.

While a toxicant could eventually be our “silver bullet” to significantly reduce wild pig populations across the country, third-party research needs to be conducted to assess non-target impacts and develop a delivery method  that is both economical and feasible.